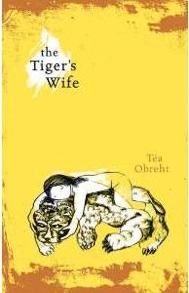 “While the villagers of Galina are reluctant to talk about the tiger and his wife,” writes Téa Obreht a good three-quarters of the way through her lauded debut novel, The Tiger’s Wife, “they will never hesitate to tell you stories of the lateral participants in their story.” [pg. 237]  This is a narrative preference Obreht therefore contrives to share. The title of her novel refers to a big cat which escapes Belgrade zoo when the German air-force bombs the city during the Second World War; it refers, too, to a deaf-mute woman, beaten and humiliated by her husband, who is believed to have befriended it, with fateful consequences for all involved. But the book’s main narrator is Natalia, a young doctor in what is now the former Yugoslavia, whose grandfather was just a boy when the tiger came to Galina. And Natalia in turn hands over narration to her grandfather at several points – even though he is dead almost as soon as the novel begins – and his story stretches across the great tumultuous chasm which separates the Yugolslavia of 1941 with the Serbia and Montenegro of 2011. That is to say, the novel pads around its prey in wide, wheeling circles, and in its unpredictable gyre toys with and teases it.

Indeed, the novel’s project is a playful, fabulative one: it aims to wrap up in myth the unpalatable, incomprehensible, and fractal history of a troubled corner of the world. Obreht is not the first Eastern European writer to choose myth or allegory over blunt realism – from Kafka to Živković, Kadare to Selimović, the patchwork past of the region has almost demanded that novelists eschew bare fact for embellished lie. To this end, Obreht’s characters avoid the simple truth at every opportunity: the villagers of Galina make up a death far grander for the village’s blacksmith, whose accidental suicide is rewritten as a brave last stand against the ferocious tiger; Natalia herself pretends to her grandmother that she has no knowledge of the secret cancer which has killed her grandfather, though in fact she attended every consultation. Yet these omissions and falsehoods are seen as protective balms, salves against truths which can do no good. “I had been taught long ago that there are some stories you keep to yourself,” Natalia tells us. [pg. 330]

The village of Galina appears on no map Natalia can find; all of the inhabitants directly involved with the tiger’s wife are long-dead. And yet the village continues to exist, and the stories once told about a woman who became betrothed to a tiger in order to wreak bloody vengeance on her violent husband continue to have power, and Galinan children in 2011 still creep around the hills at night in search of orange and black stripes. This is because, of course, those stories held a truth deeper and more meaningful than all that brute fact: “the people of Galina […] attached their anxious grief [of war] to the girl so they could avoid looking past her to what was coming.” [pg. 335]   Stories carry our baggage for us, then – and the almost endless cycle of war and conflict which forms the backdrop for this incongruous fairytale of a novel requires, and continues to require, a lot of heavy-lifting.

Throughout his life, we learn, Natalia’s grandfather carried in his pocket The Jungle Book, that collection of Victorian fables with clear moral lessons and encoded messages. He has promised the book to a man named Gavran Gailé, a figure he knows as the Deathless Man. Gailé asserts that his uncle is literally Death, and that he can neither age nor be killed – abilities Natalia’s grandfather witnesses with his own eyes in the three stories in which he recounts separate meetings with this impossible figure. Gailé deals in superstition – predicting who will die and when merely by reading their coffee grounds – and this attachment to folk wisdom and ritual suffuses the novel. At its close, however, Natalia meets a man only pretending to be the spirit which comes to ease the passage of the dead to the next world – a spirit Natalia herself has travelled miles to appease, retrieving her grandfather’s belongings from the remote village he travelled to, naturally without any explanation, in the hours before his death. That is, superstition in The Tiger’s Wife both is and isn’t true. It both does and does not have real-world efficacy.

What to make of all this? Firstly, of course, that it isn’t precisely original: Obreht’s brand of magical realism is straight out of the Gabriel García Márquez Guide to Magical Realism; her novel shares with Salman Rushdie and others an interest in the fissures between traditional culture and Western-style consumerism; it is told in an allusive, eliding style which is well executed but feels less than unique. The Tiger’s Wife has received considerable critical praise and been shortlisted for the Orange Prize, and it would indeed be wrong to criticise so carefully turned a debut: Obreht is a novelist to watch, from and for whom we should wish for better. The Tiger’s Wife is an absorbing read, full of memorable images and possessed of a gentle, but potently consistent, atmosphere of nostalgia, dignity and loss. Nevertheless, much of what Kapka Kassabova has already written in a dissenting opinion in The Guardian holds true for me: throughout the novel, she argues, “the back-stories stand in for a story, and style stands in for emotion.” When all the mythologising is done with, all the fables unspun and all the truths refashioned, their remains at this book’s heart an untrodden clearing. Here, it somehow seems to me, the novel’s prey still sits, grazing and untroubled. The Tiger’s Wife is beautiful to look at, but a little toothless.