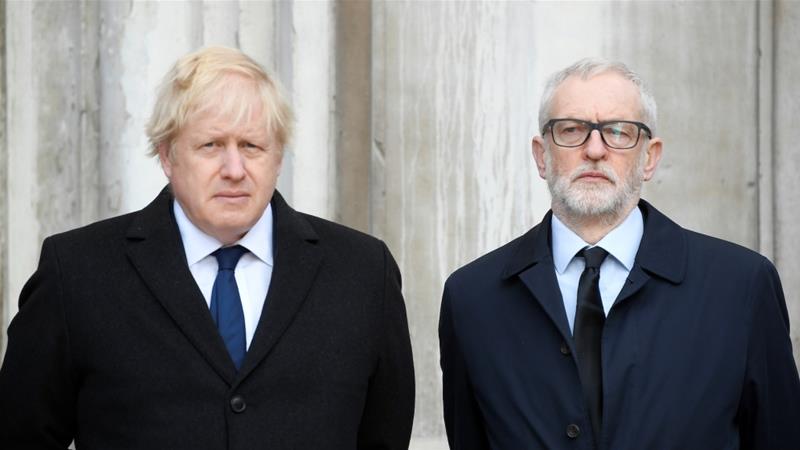 Be careful what you wish for. For more than two decades, British voters lamented the similarity they perceived between the two major parties that jockeyed for government positions within their First Past The Post electoral system. From the rise of Tony Blair in 1994 until the Brexit vote in 2016, the “neoliberal consensus” dictated and defined the terms of political debate; the choice between the two options felt sterile and marginal. Conservatives felt cheated, their leaders championing gay marriage or wearing baseball caps at theme parks; the Labour faithful bemoaned PFI and City-friendly deregulation. If only – if only! – they said, there was a choice to be made.

The choice for many is now, it would seem, far too stark for comfort.

The 2019 General Election campaign has been a contest between a right-wing, sotto voce  nativist Tory party and a socialist, redistributionist Labour Party; between on the one hand Jeremy Corbyn, a champion of the left for decades and an anti-imperialist peacenik, and on the other Boris Johnson, the true heir to Churchill in his bullish British chauvinism. Where Labour seeks to radically alter the capitalist model under which it perceives voters to toil arduously and to little benefit, the Tories seek Shanghai-on-Thames, a free-trading buccaneer nation of carefully stratified worker-citizens. The Conservative Party has reoriented as the party of a certain part of a rump-England, ruddy and anti-metropolitan; the Labour Party as a fierce opponent of privilege and inequality of all kinds.

Or at least this is the narrative, the dividing lines that appear to have been drawn over a country far more confused and conditional than any of this. One writes country where in truth one means a set of countries, a collection of nations that breaks down with far more granularity than merely “England-n-Scotland”. By this I mean not the non-existent geographical divides of Brexit (to leave behind a further false narrative of a north-south or even class-based oppositionality as regards the EU issue), but rather the competing interests of regions voting more separately and disparately than they have perhaps ever before: the north-east sticking with Labour, the north-west flirting with Brexit, the Midlands with Conservatism. The centre cannot hold – but not in the way you think.

We live at a time of crisis; I am convinced radical shifts are necessary. But Labour’s manifesto is no more or less Leninist than a standard Scandinavian settlement; and Norwegians or Swedes are rarely characterised as firebrands. Likewise, so insipid is the Conservative manifesto that is difficult to brand the party as particular pro-active, or even especially right-wing at all. On either side, each says the other is hiding their true intentions; this may be so, but Michael Heseltine depicted Tony Blair with demon eyes and now both flirt with the Liberal Democrats. Sometimes political parties simply believe what they say they do. Johnson’s Conservative party likely will be confused on a policy level – nativist in some areas, authoritarian in others, emollient elsewhere; Corbyn’s Labour may put up taxes a bit and return utilities to public ownership, but is not going to abolish the army or destroy capitalism. The extremes have not, in fact, yet been reached. Only the limits of the mainstream have been stretched; that this comes as such a shock is evidence more of the withering of the British political consciousness than it is of any especially radical moment.

Nevertheless, what is different about this campaign is its tenor, its tone. The Conservative party, a study has found, has lied in 88% of its online ads; Labour not at all. That the country seems to be considering rewarding this sort of approach to political discourse – of a piece with its figurehead’s approach to truth throughout his journalistic career, but unprecedentedly corrosive of public trust, and in an echo of the Surkovian approach perhaps designed to be just that – really is a bad sign for our politics. The decades of having no choice has appeared to cheapen the idea of having one at all; that everyone is “just the same” has offered carte blanche to voters who simply wish to vote for whomever makes them feel better, regardless of the context. Punch-drunk from degradation, we go giggling into the sea.

The principle objection to any anti-Johnsonian attack is Jeremy Corbyn: he is a threat to our national way of life, to our security; a terrorist sympathiser, an anti-semite. Many of these accusations have more to do with his difficulty in guiding the electorate closer to  his policy perspectives than anything inherently wrong with his actual positions; but the last of these accusations has exercised me a good deal during the campaign and before it. Is it to ignore racism and accusations of it to argue that Jeremy Corbyn might still be the nation’s only hope in the face of a Prime Minister who cares little for what he does with power as long as he has it? Johnson is a figure who will say or sanction anything – avoid all scrutiny or blanket the airwaves with untruths as proves profitable – in order to hold on to an office which, as his own manifesto suggests, he and his party have little idea how to utilise. In this context, is it reasonable to hand-wave accusations of anti-semitism, or to dismiss them, or to accept them but hold them in balance with other considerations? Are any of those approaches defensible? Which is worst?

No one’s ethical choices are pure in the midst of what has been a dismal campaign. Labour’s failure to handle anti-semitism is certainly a sign of institutional incompetence; it may also be a sinister expression of something rotten at its head or heart. That this question is still be resolved to the satisfaction of many in the Jewish community and beyond is a serious issue for Corbynism, which struggles – in the face of daily attacks – to accept any criticism. But voting for Boris Johnson seems to guarantee not the Brexit for which many of his supporters seem myopic in their enthusiasm – that moment of national coming-together – but the speeding-up of a cultural turn in the country which insists on uniformity, on vapid conformity to a set of fictions we all know are lies but which we parrot either because they suit us or because not to do so is to court opprobrium. Perhaps defending Corbyn on anti-semitism is part of this movement; but the level of scrutiny to which Labour has rightly been subjected on the issue stands in stark contrast to the lack of interrogation that is permitted by Johnson’s Conservatives.

Few could describe the current Labour approach to anything – much less the establishment of pogroms – as ruthlessly strategic, and in fact in many ways they emerge from this campaign as a band of dogged pragmatists, of make-do-and-menders. In her recent book on anti-semitism, even Julia Neuberger – not one to compromise with prejudice and an eloquent critic of Labour’s reaction to antisemitism in its ranks – wrote, “there is antisemitism, but it is not like the 1930s.” She exhorts”people who are not Jewish [to] call out … shadowy views”; I have tried to do this in daily life, and, while other anti-Tories won’t face what they might find to be a Hobson’s choice, yet will vote Labour tomorrow.

The compatibility of these positions may be in question; but Boris Johnson has consistently acted with much greater cynical dissonance, elevating hypocrisy to the level of philosophy. Corbyn may oversee a creaking system reluctant to admit fault; Johnson speaks of letter boxes and “piccaninnies,” of hook noses and shadowy conspirators. Here is a man who at one point makes the queasily eugenicist argument that IQ quotas somehow tell us something about who in our society deserves reward; and at another presents himself as the champion of the working class against the marauding foreigner. Here is a man who says there will be no barriers for Northern Ireland, all the while working on a new Sykes-Picot line that will divide Ulster from Great Britain more surely than any border poll.

This Janus-faced strategy contrasts with Corbyn’s attempt to hold together the fractured coalition of Remain and Leave which constitutes not just his party but our whole polity. To reward it is to endorse cynicism. It is to beg for it to continue, to express a preference for the erosion of any semblance of communal feeling or understanding in favour of ever more segmented divisions. Johnson cannot say different things to different audiences unless he splits them apart from one another. To vote for this fragmentation is to say that any effort to unite us is doomed to failure; better to accept our divisions and leverage them. Many of those who may vote Tory tomorrow are not Johnson partisans; they will be making a choice, though one informed more by exhaustion than enthusiasm. We are tired as a nation; to build something new feels like hard work. To play in the ruins at least offers a barren kind of lenience, granted for time served. “Get Brexit done” offers a holiday from politics.

The Conservative anti-political offer, then, is a complete package: knowing fictions, impotent despair of ambition, derogation of duties. Hand it all over to Johnson, let him deal with it while he tells us another joke. The campaign hasn’t so much replaced a lack of choice with a stark one; it has offered the opportunity not to choose, to accept the inevitable, give in – as we did not in 2017 – to the Tory right to rule. If the country makes that choice, it will have confirmed the neoliberal consensus as not so much challenged -either by populist nationalism or resurgent leftism – as in place. There will have been seen to be no alternative, even to lies.