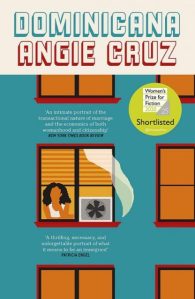 What a curious time it is in which to read novels as if they matter. The shortlist for this year’s Women’s Prize has been overtaken almost entirely by events: these six books demand more attention than many readers will have been able in this chaotic year to muster. In spring, I went through a period myself in which I was unable to read a great deal of anything, much less a series of demanding fictions. That I have now managed to reach a place where I can devote time and focus to books is a token of privilege more than it is any sort of personal victory. From pandemics to protests, much of what is currently vital is taking place far beyond the pages of literature.

In many ways, too, Dominicana by Angie Cruz is the quietest, the most unassuming, of any of the six novels in contention. Its first-person protagonist, Ana Canción, is aware from very early on that “a ravenous world waits outside”, but for much of the novel she spends her life in a series of aggressively closed environments: first the strict family home she grows up in, and then the small New York apartment in which she finds herself when she marries at 15 a migrant worker in his thirties, Juan Ruiz. In both contexts her behaviour is closely monitored and controlled – in the Dominican Republic by a mother for whom she is primarily “the ticket for all of [the family] to eventually go to America”, and in the US by Juan himself, for whom she is, on her arrival in the city, “now a wife [… who has] duties”.

I was reminded repeatedly while reading this novel of the work of Miriam Toews, and in particular of her Irma Voth (2011). Toews has solved the problem of passivity: her narrators and protagonists are done-to rather than doing, but they remain magnetic presences. Similarly, despite being the narrator of Dominicana, Ana is its most passive presence, a teenage girl of whom much is asked – and yet to whom little is given. Almost the entire novel drifts by before she does anything for herself, since she has been conditioned to expect only to serve the community.

In Toews’ work, too, women are most often expected merely to play their part – work only to actualise the needs of the community which grips them, rather than form anything like a symbiotic, mutually beneficial, relationship with it or anyone else. Cruz’s novel adds to Toews’ almost peerless evocations of claustrophobic control  the experience of the immigrant (in Irma Voth, the Mennonite protagonist has left their native Canada to hide from the modern world in rural Mexico, but this isn’t quite the same journey made by the desperate-but-enterprising migrants of Dominicana). “How in the world does anyone say good-bye to everyone they love, everything they know?” Ana asks herself at one point; the answer is simple: no one can. Dominicana is a novel of loss, and of accommodation to it.

The gains promised by economic migration – in the Canción family home, “Money [ … and] papers [… are] always the main subject” – turn out by contrast to be thin. “In September,” Ana is told by Juan, “you’ll go to a secretarial school so you can learn how to type. And you’ll work at my friend’s agency. Don’t you worry, everything’s been decided.” This isn’t the freedom New York was meant to embody – and in the absence of everything she has ever known, Ana feels in fact more imprisoned than ever. When Juan takes by degrees to domestic abuse – “A slap’s one thing, a dent in the wall another, but choking?” – Ana’s situation feels untenable, and yet is entirely inescapable. A nurse at the local pregnancy clinic slips Ana a leaflet featuring “a photograph of a woman with a busted lip and a black eye filled with panic”, but with her non-existent English and total lack of support networks beyond Juan’s circle, Ana is at a loss as to what to do with it; in the event, Juan finds the leaflet, and is sent into another rage by it.

Ana accommodates herself, too, to this. But as time goes by, she becomes more comfortable with the city –  fire alarm, a police siren, a bus halting at its stop … at first they were so loud, […] but now they sound as pleasant as the radio” – and also with the idea of agency (“Puffer fish can kill you if you eat them, yet some people take the risk and die”); she begins as affair with Juan’s brother, César, who helps her begin to earn some money of her own, which she hides in a ceramic doll. Ultimately, however – and here Cruz surely deliberately wrong-foots the reader – Ana chooses her family, and breaks it off with César. Doubling down on settling in, Ana invites her mother to live with her and Juan in New York, locking herself further into the pretence that is her marriage. When her mother arrives, she too seems underwhelmed: “She had wanted New York. She has pushed for it. So this is New York, she says with a weak smile.” The dream pulls along the dreamer.

This is a novel that constantly threatens to broaden out beyond Ana’s perspective – Dominican politics plays an important role in the book, driving many of its events although Ana remains only dimly aware of how, and her apartment sits in the middle of a part of New York, Washington Heights, that is full of stories similar and complementary to her own – but Cruz, for better or worse, sticks to the limited first-person (admittedly cheating every now and then, with Ana suggesting she’s over-heard something or pieced scenes together from gossip). This means that Dominicana lacks of the polyphony of Bernardine Evaristo’s Girl, Woman, Other – and in its mission to add warp, weft and detail to our understanding of the immigrant experience this feels a shame. There’s also something else going on here, though. When I read Evaristo’s novel after it was included on last year’s Booker shortlist, I wondered if it didn’t offer a “Radio 4-friendly version of British blackness”; I think Dominicana offers in its level of detail and intimacy a less comfortable vision of the minority experience. In an afterword, Cruz explains that Dominicana is a version of her own mother’s life, the sort of story which, “although common, [is] rarely represented in the mainstream narratives available to us.” In this aim, Dominicana succeeds.

Still, in the year since Girl, Woman, Other won the Booker (alongside, unnecessarily, Margaret Attwood’s The Testaments), evidence has been ample that what I thought of as that novel’s “soft-centredness” will strike many, many others as radical and even alienating: the conversation is not as advanced, well distributed or as nuanced as any criticism of Evaristo’s novel as “pulling its preaching punches” seems willing to acknowledge. This brings me back to my privilege as a reader: perhaps only someone in a happy position would suggest that Girl, Woman, Other needed to be more. Given, then, the ambition of Evaristo’s novel elsewhere, and the clear canniness of its approach, it must be a leading contender for the Women’s Prize, too; if Mantel remains the bookie’s favourite for her star-quality, I might suggest that the plague-novel Hamnet beats out The Mirror & the Light by dint of the latter avoiding many of the faults with the former that Colin Burrow identified  in his nevertheless generous LRB review. Let it be between Evaristo and O’Farrell, then – either novel seems a fiction well tuned to our times … which might at least allow us all to accept or believe that, even in days such as these, reading novels might still matter.