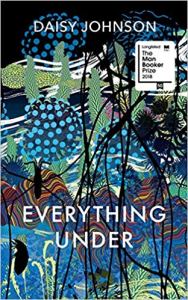 Daisy Johnson’s debut novel, Everything Under, is this year’s Elmet: the precocious, lyrical, off-piste British debut which the Booker is recognising to signpost new, native talent. A little like the English Premier League, the Booker, in the international perspective it has taken since 2013, has been routinely the subject of criticisms that it is failing to protect its own. No less a luminary that Peter Carey recently argued that, “the Booker prize has always had a very distinctive quality, which comes from – I might not describe it as excluding Americans – but has to do with what is still the Commonwealth, and the leftovers of empire, which still have a lot of cultural connections.” It’s hard not to think that including a novel like this on the shortlist is one way that each year’s clutch of Booker judges feels it can pay homage to the prize’s roots.

This is not to say, of course, that Everything Under is without merit – it is stylistically supple and impressively atmospheric, all dun and muddy river landscapes and quietly desperate suburbias. Rather, it is to suggest that the novel doesn’t exhibit the maturity, the sureness of touch, that other books on the shortlist, and the sorts of book that traditionally have found their way onto the shortlist, do. This is a novel which begins with the words, “The places we are born come back” – but at the end of that paragraph admits that “cut wrong side into my skin are not canals and train tracks and a boat, but always: you” (p. 1). That is, within a few lines Johnson manages to mix her governing metaphor, between place and person. This isn’t an unforgivable slippage, but nor does it seem quite fully baked, either.

Take, too, the novel’s structure: its events take place along a jagged timeline, parcelled out in short chapters separated by time, place and perspective; these are never dated, and often seek, especially at first, to obscure their place in the chronology; they have vague titles which recur as the only clue to their purpose or significance (“The River”, “The Cottage”, “The Hunt”). Obviously this is designed to add a breadth to the narrative, as in Marlon James’s perspective-hopping A Brief History of Seven Killings, or to confound until the crucial moment a reader’s understanding of precisely how the story fits together and plays out, as in Eleanor Catton’s jigsawish The Luminaries. But Everything Under sometimes slightly lacks the confidence to shift the voice too much – each chapter, whether first-, second- or third-person, reads otherwise like the others – and also not to include sufficient clues for the reader that by half-way it is more or less clear what is going on.

That is, the novel is never quite as mysterious as it means to be – and this is a problem, because what it aims most to resemble in tone is myth, legend, faerie. Jeff VanderMeer has given the book an approving notice; it wishes to be, and can most usefully be read as, weird. Little Gretel and her mother, Sarah, are river people; they live on a boat and forage in the forests, keeping a watchful eye out for the approach of a water-dwelling monster, the Bonak. They speak their own language and stay away from outsiders, “as if the place we were moored wasn’t on the maps” (p. 61); Sarah seems to not be fully human in ways ineffable and never fully confirmed (“even mothers need to have secrets” [p. 17]). When another young person, known as Marcus, arrives in their small world, the pair find themselves in the unusual position of taking someone in. But Marcus has their own past – born Margot, and strapping themselves down with clingfilm and repressed guilt, he has fled his parents in order to avoid fulfilling a prophecy made by their next-door neighbour, Fiona, that he will kill his father and sleep with his mother. When he arrives at Gretel and Sarah’s boat, he has already killed one man – another boat-dweller named Charlie – and his world is consequently all fear that Fiona will turn out to be right.

So far, so Oedipus Rex. Just as in Sophocles, forgetting is key: Marcus, adopted, has no idea who his biological parents might be; Sarah’s origins and precise powers are dim and mysterious; Gretel, when she leaves home, spends sixteen years apart from her mother, and loses track of her entirely, spending a whole strand of the novel searching again for her. Most obviously, in old age Sarah suffers with Alzheimers. “Everybody forgets,” she told Marcus years before (p. 214) – and for her, too, it becomes true. But Johnson doesn’t quite do much with this. Marcus is forgotten, his fate erased from Gretel and Sarah’s knowledge just as his past and origins have been from the record. At the close of a novel full of quite awful pain, Gretel decides, “I must move on. I return to the office, work at my desk. […] There are more good days than bad” (p. 263). What does it mean that, unlike in Sophocles, tragedy and circumstance can have such little consequence? Everything Under isn’t sure, its ideas greater than its wisdom; and so for the most part it reads like a shrug.

The fusing of the Oedipus myth with the Selkie legend, too, doesn’t seem to go anywhere especially interesting. It’s a potentially diverting juxtaposition, but the co-location of the novel’s Oedipus cognate, Marcus, with a woman whom the young Gretel claims is “a sealady [… with] fins for feet and gills” (p. 146) appears to have no particular significance. Sofia Samatar’s “Selkie Stories Are For Losers” did more to renovate this hoary old myth in rather fewer words (and covers all the ground Johnson manages, to boot); Kamila Shamsie’s Home Fire (2017) refigured Sophocles (in that case Antigone) with more fluidity and clarity, too. Only in the Bonak – a terrifying, shadowy creature not unlike M John Harrison’s Shrander from Light (2002) – does Everything Under create a truly memorable imaginative locus. The Bonak is a sort of wandering agglomeration of fear, a monster with not just a made-up name but one almost conjured into being by the sense of siege which characterises Sarah, Gretel and later Marcus’s existence. “Do you think we [… t]alked it into being?” Gretel asks Marcus’s adoptive father, Roger, at one point in the novel. “I don’t know if it matters,” he replies (p. 168); even the novel’s most effective aspects are afforded little purchase.

I’m more open than I am in the case of The Long Take to the idea that I’m missing something here. Everything Under is a well-realised novel with something to say. But I also experienced it as too often clumsy, as a book which shows a lot of promise but which isn’t always flattered by its inclusion on the Booker shortlist (though its sales will surely, and happily, be lifted). Its relative lack of sure-footedness is perhaps most notable in its treatment of its transgender elements: not just in the siting of Tiresias in the gender fluid Fiona or in the switching of the Oedipus role from male to female (everything else about the figure’s experience is, alas, identical), but also in the manner and outcome of Marcus’s journey from being Margot to becoming the boy found by Gretel in the forest. Even when it is a novel intensely concerned with a deterministic view of human agency, does Everything Under really intend to be quite so biologically fixed as it ends up being? Sarah and Gretel define their own special world by inventing their own language; Marcus’s fate is sealed not by the gods, as in Sophocles, but by the way in which human patterns of thought are conditioned by the words given to us to shape our selves. But none of this, despite some invariably lucid prose and genuinely seamless generic play, seems quite considered enough – and, in the end, Everything Under meanders like a stream rather than roaring like a river: the stretch is beautiful in its way, but it might have been better for us to arrive later, at the confluence.

3 thoughts on ““More Beginnings Than There Are Ends”: Daisy Johnson’s “Everything Under””