It’s become something of a tradition on this blog for me to list, in no particular order, my top five albums of the year. In the main, my selection criteria are self-defeatingly non-specific and impressionistic. I cannot, dear reader, show my working. What I do try to do, however, is listen to every record I recall making a big impact on me in the preceding twelve months, and then wittle them down to those which not just feature wonderful songs, but which hang together and forge something new in the proces. I also try, throughout the year, to avoid featuring LPs I think might be candidates for the year’s-best list in the right-hand ‘Sounds We Like’ column we update each month.

Other, then, than the best of those picks (most obviously Doug Paisley’s beautifully warm Strong Feelings and John Fullbright’s intermittently devastating Songs), what is left? Bubbling under the top five this year are Leonard Cohen’s Popular Problems (far more virile and creative than it has any right to be), Nick Mulvey’s First Mind (unusually well-balanced between gossamer-light and thunkingly-deep), and King Creosote’s From Scotland With Love (KC’s best in years); but also the wonderful Hurray for the Riff Raff’s Small Town Heroes, which sounds like a Gillian Welch record but injects queer theory, feminism and activism into the ossified bones of Appalachian folk, and Samantha Crain’s sweetly growling Kid Face, which was released in the US in 2013, but made it over here in January.

So that’s those. Let’s, though, do the top five.

In 1792, a Welshman named John Evans set out for Baltimore and beyond, in search of a lost tribe of Welsh-speaking Native Americans. In 2012, the erstwhile Super Furry Animals frontman, Gruff Rhys, followed in his relative’s footsteps and toured – for some legs with this year’s Flaming Lips bête noire, Kliph Scurlock – across the Midwest, writing songs as he went. What resulted was a unique record, simultaneously intensely personal and unusually expansive, which includes much of SFA’s famed whimsy but also a real sense of gravity and humility in its treatment of the First Nation peoples and others. From the indie pop of ‘100 Unread Messages’ to the ear-worm electronica of ‘Allweddellau Allweddol’, here is a journey on which every stop is worth making – and yet which also makes sense in itself. Really special.

One of my favourites of last year was Josh Ritter’s The Beast In Its Tracks, and perhaps for that reason I for the longest time tried to avoid including this luminous record in 2014’s top five. Landes and Ritter divorced painfully in 2011, and this record is her side of the break-up story told on Ritter’s LP. I think it may be the more compelling version, because the cracked melodies and keening accompaniment on show here are sparingly heart-breaking. The title track is one of the most simply beautiful songs of the year, whilst ‘Oh Brother’ earns all the comparisons made this year between Landes and Blood On The Tracks-era Dylan: it is not easy to balance anger and tenderness, but Landes achieves both on this remarkable record. She was my accompaniment on a snowy Boxing Day drive; I’m not too big to admit that’s what won Bluebird‘s place on this list. You can’t argue with that kind of pretty. 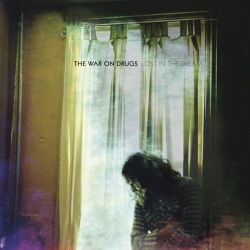 The War On Drugs, Lost In The Dream

There may not be a best-of list produced this year that doesn’t include this entirely unexpected piece of work. The War on Drugs have been making music for years – most famously, Kurt Vile is an ex-member – but they have never burst through in the way they have with this effort, which is best described as Mercury Rev meets Dire Straits. If that makes it sound a teensy bit old-fashioned, I might not be unfair in implying so; there’s something meaty about this LP which consciously recalls the sort of ‘event’ record which isn’t really made these days. At the same time, it sounds extremely fresh – ‘Red Eyes’ in particular sits very comfortably in the current radio landscape, rather than idling at the back of the room waiting for nostalgics at Absolute to playlist it. What I think so many people have responded to in this album is the obvious earnestness of its making: here is music that is cared about by those recording it. That doesn’t make it joyless – quite the opposite – and this mixture of spot-on musicianship, careful songcraft, total commitment and enthusiasm for melody makes Lost In The Dream potentially one for the ages. 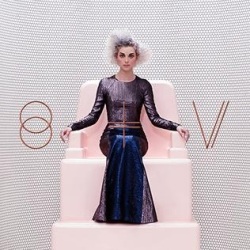 I’ve long felt I’m missing something when it comes to St. Vincent. Most everyone whose opinion about music one should respect seems to believe Annie Clark to be something close to the unacknowledged saviour of the pop song, and yet I’ve never managed truly to connect with her work. (Nodding, chin-strokingly, doesn’t count.) But St Vincent hit me straight away, despite – or maybe because of – a sense that Clark has not even tried to leaven her idiosyncrasies this time around. The album’s cover features her dressed in purple and seated on a throne, and this imperious pose is maintained throughout, with songs like ‘Rattlesnake’ and ‘Digital Witness’ sounding like the swaggering sort of cuts which should be selling the units currently flogged by Gaga. At its weirdest – on ‘Surgeon’, perhaps, or ‘Psychopath’ – Clark seems to be willing the listener to disconnect. But there’s something magnetic about music which playfully gives no quarter, when so many songs package themselves as products, or movements morph into genres, and this makes St Vincent in many ways the most exciting record of the year. 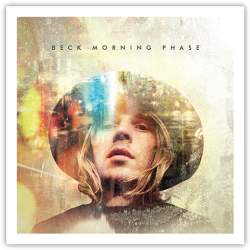 I wanted to smash idols, I promise. I didn’t want to be another writer giving Beck Hansen the thumbs-up, or teaching other listeners to suck eggs. Despite his recording hiatus, which individual interested in music is not aware that Beck is a genius? Which of us would deny an Odelay, Midnite Vultures or Sea Change a place in the pantheon? The astonishing news: this may be at least as good as most of those, and certainly singularly reminiscent, as all critics have noticed, to the latter. Some have suggested this is playing safe; I’m not at all sure this trippy album is what they think it is. Morning Phase breaks like a sunrise, and drifts like purple cloud. It is capacious enough to include the catchy – ‘Heart Is A Drum’ – and the ambient – ‘Waves’. On that latter song, Beck sings, “I move away from this place / In the form of a disturbance / And enter into the world / Like some tiny distortion.” In just that way, Morning Phase gently disrupts the time during which you listen to it; it sounds simple, even reductive (that space-cowboy image on its front cover), but casts around at all times for the grace note and the giddiness that can cast new light on its chosen forms. Honestly super. Cast up your idols, people.