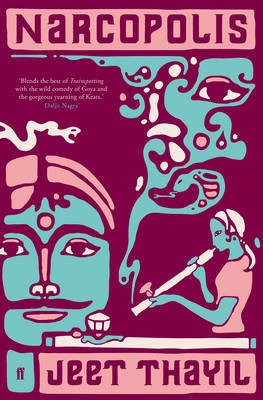 The six-page prologue which begins Jeet Thayil’s debut novel, Narcopolis – a disorienting trawl through India’s recent history seen through the bleary prism of the opium pipe – is a single sentence. It makes a lot of this, pretending to something like the form of the smoke exhaled by the first of our ‘I’ narrators – and exhaustively, tortuously, over-complicating the identity of the other.

[…] that I, the I you’re imagining at this moment, a thinking someone who’s writing these words, who’s arranging time in a logical chronological sequence, someone with an overall plan, an engineer-god in the machine, well, that isn’t the I who’s telling this story, that’s the I who’s being told […] [pg. 1]

Of course, and as the sentence can’t quite leave unsaid, all this means is simply that “the man and the pipe” are both speaking to us simultaneously, or at least that what we read is the product of their conversation. We get more of this: “and if memory = pain = being human, I’m not human, I’m a pipe of O telling this story over the course of a single night”; “I found Bombay and opium, the drug and the city” [pg. 7]. Duality, or more accurately multiplicity – the way in which one thing can also be other things – will become a theme of the novel, and fittingly this weird admixture of obscurant’s filigree and authorial diktat becomes a novel which is both under- and over-cooked.

At first the story of the opium den frequented by our narrator, Dom Ullis, through the medium of the pipe Narcopolis soon stretches much further – indeed, he is absent for most of the novel. The narration comes somehow to encompass the other characters who frequent the establishment: from its proprietor Rashid to the hijra Dimple, the novel spends an awful lot of time imparting the life stories of people with whom Dom Ullis only has the briefest of acquaintances. The entirety of the novel’s second of four ‘books’, for instance, relates the story of Mr Lee, an exile from Mao’s China who first introduces the gelded Dimple to opium. All this pointedly brings into question the veracity of the teller and the telling – fitting for a novel which doesn’t just feature frequent, and prophetic, opium dreams, but is structured like one. What it doesn’t do is add much in the way of direction or weight.

You’ve got to face facts and the fact is life is a joke, a fucking bad joke, or, no, a bad fucking joke. There’s no point taking it seriously because whatever happens, and I mean whatever the fuck, the punch line is the same: you go out horizontally. You see the point? No fucking point. [pg. 22]

Thayil routinely, in this case through the words of Rashid’s bagman, tweaks the nose of critics by routinely not just denying them the conventional satisfactions of the novel, but refuting them entirely. At one point, one of his characters – the shifty Western painter Xaiver – even goes so far as to suggest that “only the rich can afford surprise or irony. The rich crave meaning.” [pg. 39]  Thayil is a poet, and his impressionistic prose does at times seem to imply that Xavier isn’t far wrong: his cast of pimps and dealers, shysters and addicts, are little interested in what their struggles might symbolise, but instead simply pass through pungent environments. On the other hand, Dimple sits at the centre of this duplicitous narrative – neither male nor female, given the secondary name of Zeenat by her employer and lover Rashid, known to walk town in a burqa despite her own lack of faith – and by the end of the novel “garad no longer got her high […] The thing that gave her pleasure, perhaps the only thing, was reading” [pg. 223]. Dimple acts a kind of chorus for the stories which revolve around her – the ‘businessman’ Rumi and the violence of the underworld, Rashid’s own battle between his devout Islamic faith and the raw commerce of his profit-making – and it is ultimately precisely information that she craves. It is in this movement that Thayil’s prose doesn’t quite convey his – ha – meaning: his characters yearn for something more, but the novel they are in can only paint smoketrails.

Take Thayil’s treatment of his putative subject, India itself: “I challenge you to live here without turning to Grade A narcotics,” snipes Rumi at one point [pg. 214], describing Bombay (the city that both is and is not yet Mumbai) as a kind of guesthouse for a panoply of swindlers and crooks. Indeed, Rumi’s father condemns bribery, that “corrupt model that has brought this country to its knees” [pg. 206], and Thayil’s succeeds in painting the India of the 1970s and 80s in memorably sickly colours: his depiction of the city is partial to say the least, and yet the pain and hopelessness of these addict’s lives seems to lead naturally, even quietly, to the riots of 1992-3. On the other hand (and Narcopolis shares this with one of the longlisted books not to make the final six, Ned Beauman’s rather more exciting The Teleportation Accident), history happens somewhere else in this novel: when we are told that, “Indians don’t care for past, only care for now” [pg. 65], the line feels almost like a pat explanation for a literary approach – aping the dreamy, stasis-like whirl of the khana – which doesn’t seem quite to capture the Indian experience with which Narcopolis announces so loudly it is concerned.

There’s no doubt that all this is deliberate. For Dimple, who would rather not remember the grisly details of the day her mother left her to the knife, “Forgetfulness was a gift, a talent to be nurtured” [pg. 57]. But this represents a kind of abandonment of India, a conjuring of the disenfranchised so much less engaged – and therefore somehow less complex – than Aravind Adiga’s in The White Tiger. When one of Rashid’s employees, Bengali, announces that “syzygy […] is the reason the world has gone mad” [pg. 145], he is ostensibly referring to astrological superstition; but Thayil is also, presumably, alluding to the oppositions and conjugations of his novel, implying that the postmodern reality in which “anything can happen to anyone at any time” [pg. 117] is the cause of not just his characters’ but India’s pain. The problem is, Narcopolis is ill-equipped to show us enough of these simultaneities, and in sufficient detail, fully to capture itself.

In the final section of the novel, opium gives way to heroin – a drug Rashid has always previously refused to sell – and the novel takes on a harsher tone. There are some nods to global iniquities – the Western slum-tourists, the fact that the characters consume “the unrefined shit they thrown away when they make good-quality maal for junkies in rich countries” [pg. 199] – but primarily narcotics are again used as a kind of unwieldy metaphor for the wider India. “Do you know what will come in our place?” Rashid asks Dom Ullis. “New business, and if you want to do new business you’ll have to pray to the same god as your client.” [pg. 218]   This new India, the one which emerges from garad and the riots and renames the novel’s city, is seen by Thayil as a clinical and phoney sheen – the khana replaced by a call centre – beneath which the kids still take coke and ecstasy in dressed-up clubs. The same old inequities preval. “What are the attractions of paradise for a man like you?” one character snaps at another in the final pages. “You’re not powerless and angry.” [pg. 275]   Again, that strange mix of the wispish and the insistent.

Ultimately, Thayil succeeds in his project to write a novel that curls like smoke from the pipe that tells it. Narcopolis is essentialy the story of his own lost years of addiction, and though it doesn’t seem to me to cut to the quick like Edward St Aubyn’s novelistic memoirs (which I’ve been reading in turn recently), precision is not its aim. That is also, however, its weakness: Narcopolis, with its treacly sentences and mobius-like structure, is tiring to read because it is peculiarly imbalanced, neither quite content to be an evocation of the opium den or quite equipped to be anything else. It’s far from a failure as a novel, but I doubt that makes it a likely winner of the Prize.

2 thoughts on ““A Manifestation of the Estranged Mind”: Jeet Thayil’s “Narcopolis””